The Joklik Distinguished Lectureship honors and commemorates the myriad contributions of Professor Wolfgang Karl (Bill) Joklik, D.Phil. (Oxford) to the Department of Microbiology and Immunology at Duke, which he chaired for 25 years; to the Duke Comprehensive Cancer Center, which he co-founded; and to the institution at large. Dr. Joklik (1926-2019) was a member of the AOA honor society, recipient of an Alexander von Humboldt Professorship, and recipient of the ICN International Prize in Virology. He was a member of the U.S. National Academy of Sciences, and the U.S. National Academy of Medicine. With this lectureship we honor his contributions to the broader community of microbiology and infectious disease, as well as his research achievements in virology, his founding of the American Society for Virology, and his service as editor in chief of the journal Virology, editor of the Journal of Biological Chemistry, editor in chief of Microbiological Reviews and editor and author of the widely used medical school textbook, Zinsser Microbiology. 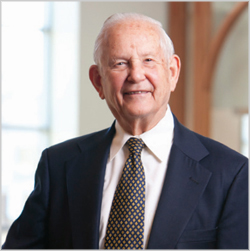 A native of Austria and raised in Australia, much of Dr. Joklik’s research focused on understanding the reovirus and vaccinia poxvirus model systems; and much of his career in general was devoted to championing the field of molecular virology. As postdoctoral fellows with Herman Kalckar in Copenhagen, Bill Joklik, and now Nobel Laureate Paul Berg discovered, isolated and characterized nucleoside diphosphokinase, the enzyme that exchanges the gamma phosphate between nucleoside triphosphates and is now known to function in signal transduction pathways. In his own laboratory, Dr. Joklik made very early contributions to understanding the mechanisms of action of interferons–the first cytokines analyzed on the molecular level, subsequently leading to his election as an honorary member of the International Society for Interferon and Cytokine Research. His lab was the first to determine the mode of reovirus replication and to sequence the reovirus genes and proteins. Many outstanding alumni trained in Dr. Joklik’s laboratory, notably Sir John Skehel, Director (1987-2006) of the National Institute for Medical Research, London, and the late Bernard Fields M.D., Adele Lehman Professor and chairman of the Department of Microbiology and Molecular Genetics of Harvard Medical School, a member of the U.S. National Academy of Sciences and author of the textbook, Fields Virology.

After chairing the department for 25 years, Dr. Joklik remained an active part of the Duke community for many years as James B. Duke Professor and Chairman Emeritus of Molecular Genetics and Microbiology. Dr. Joklik died in Durham, North Carolina on July 7, 2019. 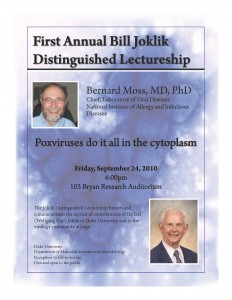 First Annual Lecture – September 25, 2010
“Poxviruses do it all in the cytoplasm”
Dr. Bernard Moss
National Institute of Allergy and Infectious Diseases 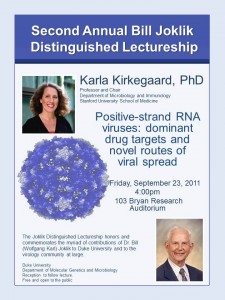 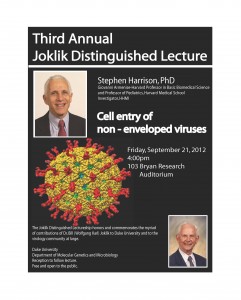 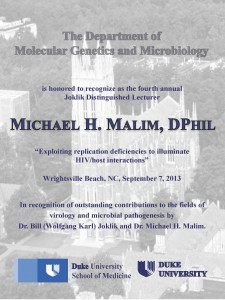 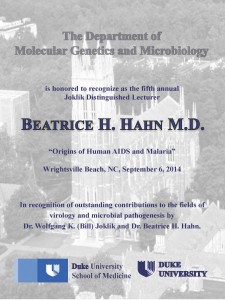 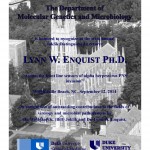